90% of the people I talk to aren't interested in what I have to say.

Only about 10% of age and income qualified adults will even consider a senior living community as an option for their future. At GlynnDevins, the writers I supervised and I talked to these people by the hundreds over the years about why they made their decision, what they looked forward to and for those who had already made their move, what they liked or didn't like about their community. Over the course of all those conversations, two things became very clear to me.

Choosing a retirement living community is about perceptions of the category, wants, needs and relationships. The work you'll see here is intended to speak to those people and their families who will at least consider a senior living community for their future. And speak to them in ways that connect with them on an emotional level. Because as a writer who worked for me at the time once said, "it's hard to build a relationship with your stainless steel sink."

Most development communities aren't full when they open. Most of those fill-up sales are already in the lead data base, but not all. The coming soon and now open messages target those who aren't the early adopters, or even early majority. They're the late majority - people who damn well want to make sure this thing is going to get built and get opened before they make a commitment. Their reasons for being interested are the same as everybody else. Reminding them of that while building a little urgency is a pretty good idea. Art direction by Lindsey Riechers. 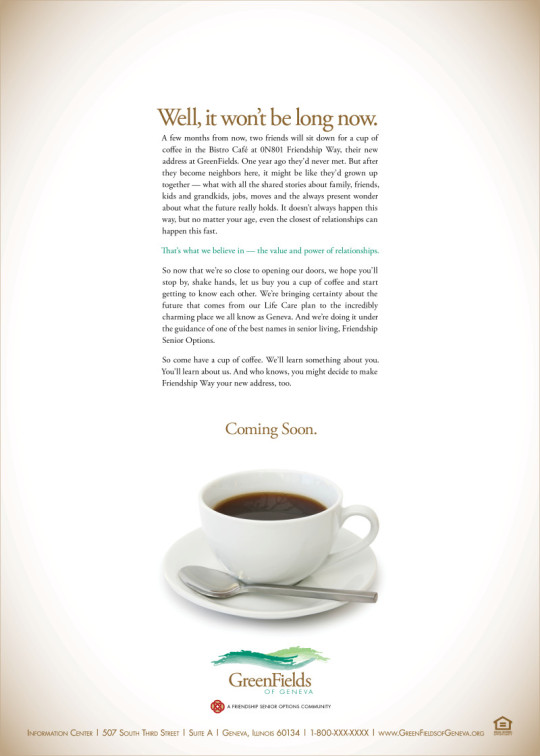 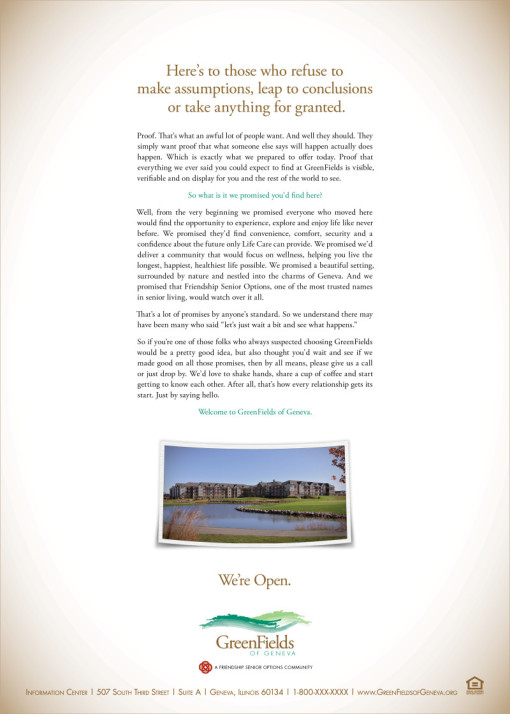 So, what if your parents could live close to you and the kids? Yeah. What if?

The target audience for promoting independent living at a continuing care retirement community isn't always your parents. Sometimes it's you. My concept and copy. Barb Gerber's art direction. 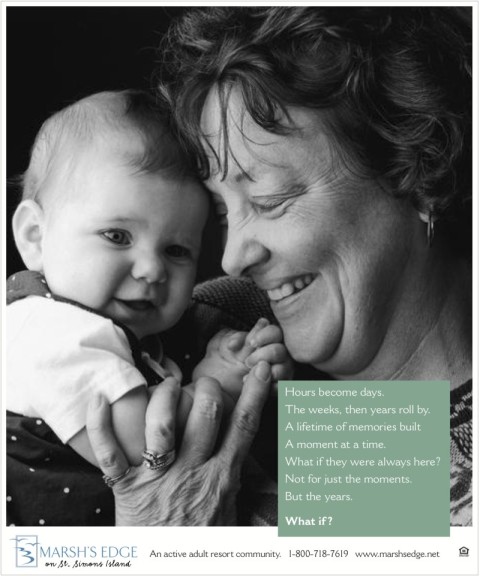 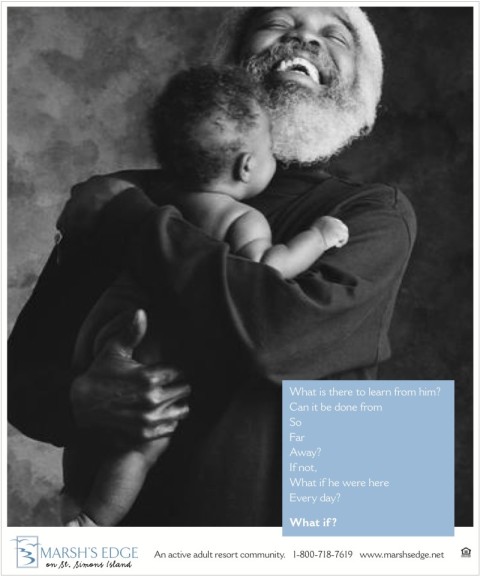 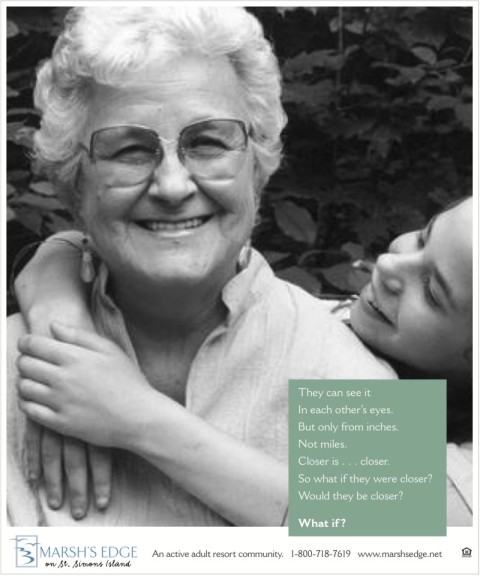 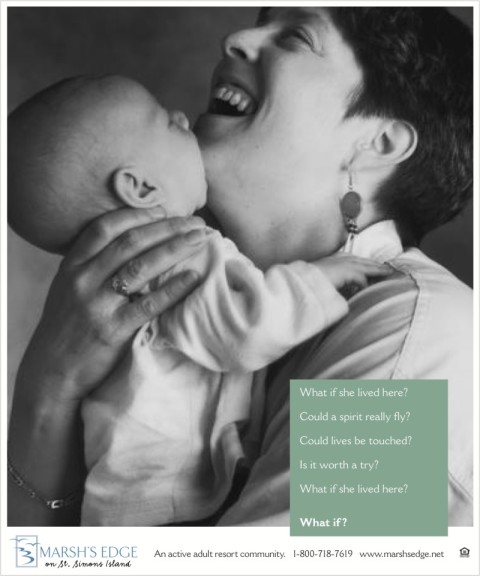 All that taking care of the house really cuts into spending time doing what you really want to do.

And we can prove it. Research commissioned by the John D. & Catherine T. MacArthur Foundation suggests that people who lead active, engaged, socialized lives tend to be happier and healthier. Made sense to me. Still does. Art direction by Jen White. 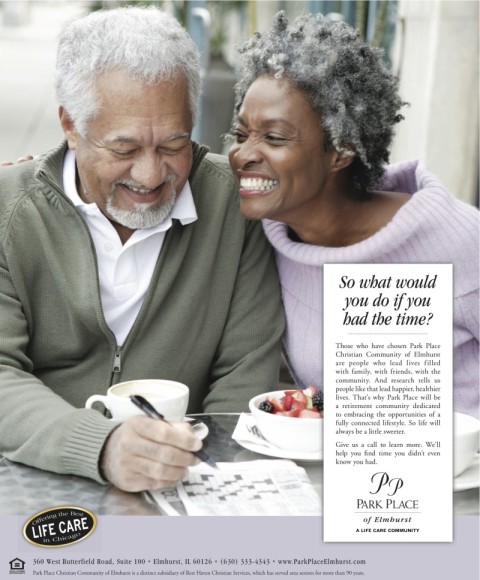 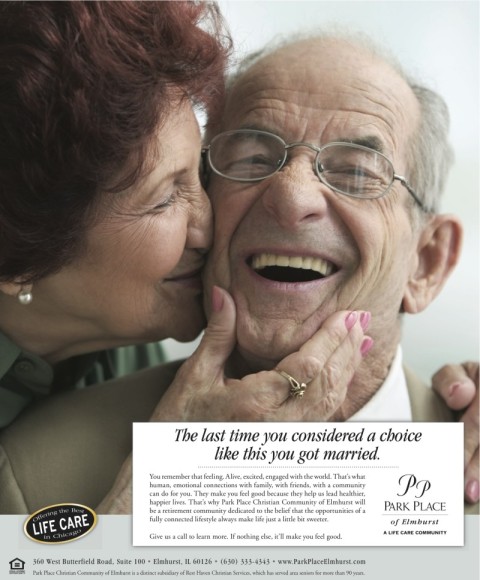 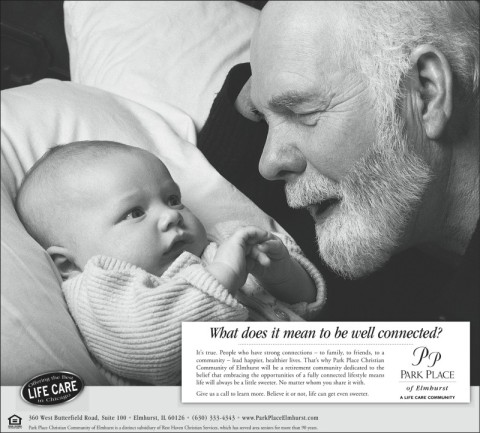 Testimonial ads from current or future residents are a mainstay in the senior living marketing arena. The standard approach equals a photograph of the people involved and a quote crafted by a copywriter based upon a conversation with them. Typically, not very compelling. Which is too bad, because virtually every one of these people actually has a fascinating story. So if you start at the beginning and follow it through, it will lead you right to why they chose the community. Their reason. Their life. Their story. I also think Barb Gerber's art direction brought it all to life beautifully.

Sometimes you just have to defend yourself against the competition.

Even though the vast majority of communities are sponsored by not-for-profit organizations, senior living is a very competitive business. And sometimes it can get a little nasty. In the case of Skyline at First Hill in downtown Seattle, word came through the grapevine that the sales team at their primary competitor (also in development) was spreading false information about the viability of the Skyline project. The client asked for an ad that would respond. I chose to focus on the truth about the Skyline product and sponsor in a way that would appeal to the wisdom of the adults who would be their customers. With this audience, it just doesn't pay to take pot shots at the other guy. I also think Jen White's art direction of the carrot and stick was inspired. 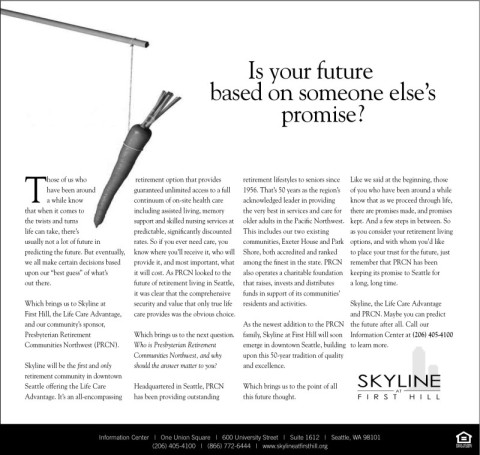 A big idea brought to life.

In 2004, I developed the theme line you see below for Skyline. They've ridden that idea ever since and Skyline has proven to be among the most successful community developments at GD in the last eight years. Their entire communications approach, from start to finish, was a product of the strategic communications process I instituted at GD in 2003.﻿ This is a video I directed designed to bring that theme line to life now that real live human beings are living there and experiencing what they can be from there. Jen White art directed. Brad Lenz was the videographer. Kate Baldwin photographer. Oh, and I provided a little B-roll, too. 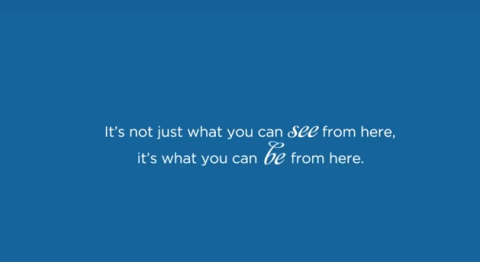 Friendship Village of Dublin, Ohio is more than 40 years old and their advertising looked it. Great community in great shape - physically and financially - because they really focus on taking care of the place. Lifecare is a great financial approach to handling future care needs. And they were expanding with the addition of 16 new villas adjacent to the main building. Each of these characteristics differentiated them from all competitors. They were the market leader and we thought they should act like it. Chris Simmons art directed.

In 2011, Wesley Retirement Services, headquartered in Des Moines, IA, challenged GlynnDevins to develop a brand position for them and their multiple continuing care retirement communities across the state, and from that, a campaign of advertising and collateral that would bring the position to life. I led the creation of their brand position based upon the idea that people will become most engaged not by what you do, but why you do it. It’s how they’re able to form a relationship with an organization. The position became We Make Aging A Positive Experience, based upon discussions and belief systems the client had already committed to in various internal meetings. They just couldn't pull it all together. A classic forest/trees situation. I took the lead in developing the advertising and collateral materials for the brand campaign, as well as how the work would roll out for their various service segments. Once again, Jen White art directed. I also wrote, directed and voiced a short video used to present the idea to our client. You’ll find it here﻿. ﻿ 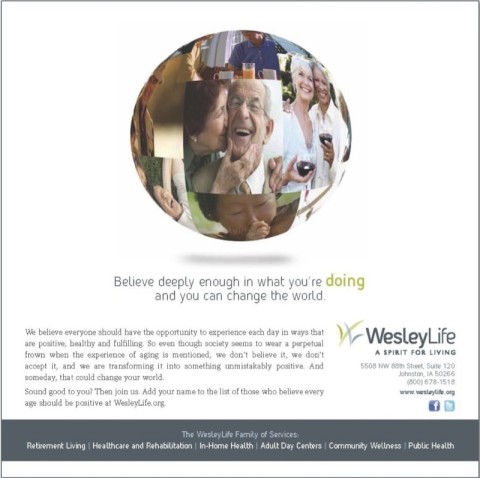 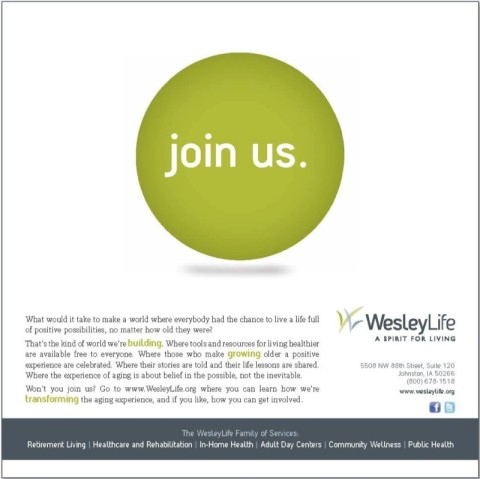 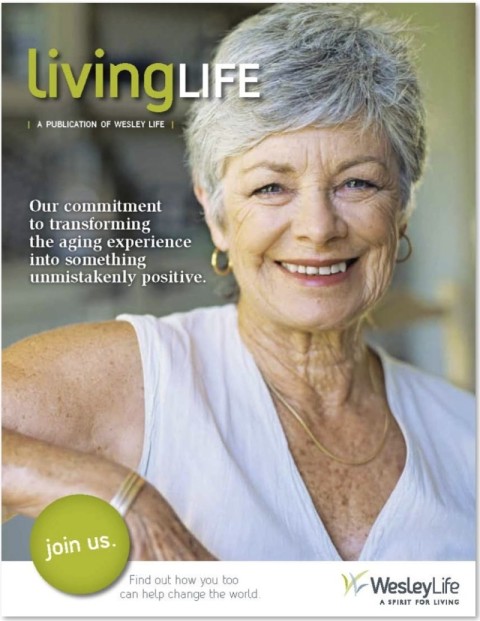 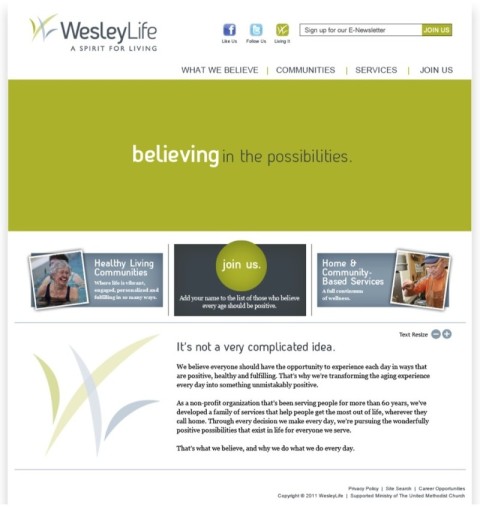 Who Controls Your Future, a.k.a., Attack The House

In December 2010, faced with a continuing sales slump across the country at continuing care retirement communities still in development, Greystone Communities, the nation's largest CCRC development company, challenged GlynnDevins to create a program that would really show a senior why their house was no longer a good investment. That challenge fell to me. I developed the strategic point of view for the program, concepted, researched and wrote the website, which was the program’s centerpiece. I even provided VO for the video included in the website. I also developed the companion offline workbook, an in-office take one card and display and a series of postcards directing recipients to call or go to the participating community website where they would find a link to the program website (no longer available). Internally, we called it Attack The House. GD marketed the program to clients on an a la carte basis. The program went live in September, 2011. Chris Simmons art directed the offline materials. Jeremy Johnson and Chris Wilson guided the look of the online effort.
﻿ 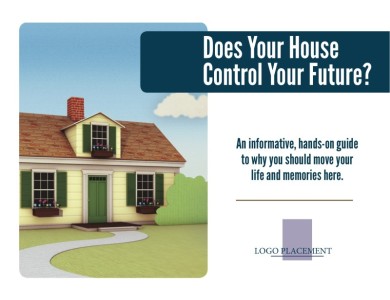 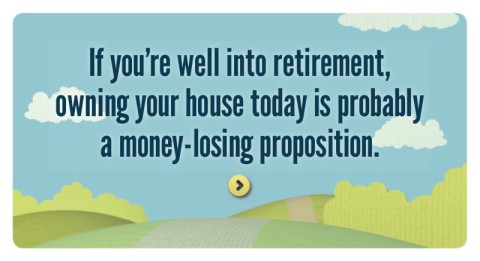 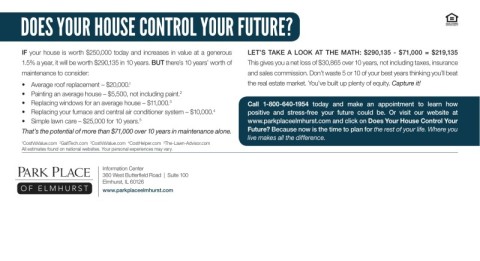 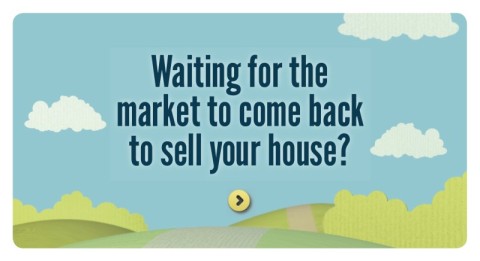 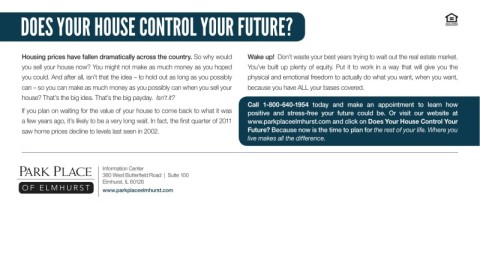 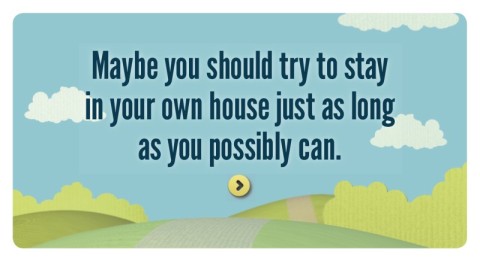 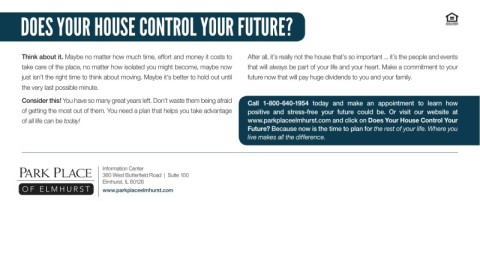 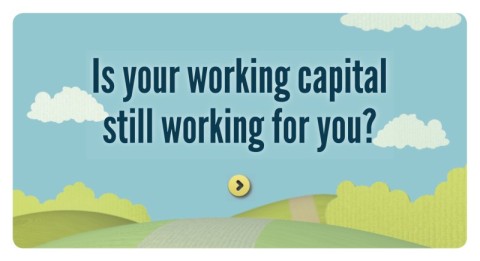 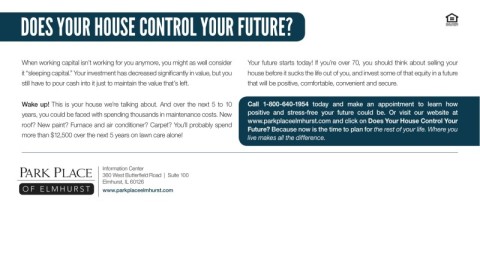 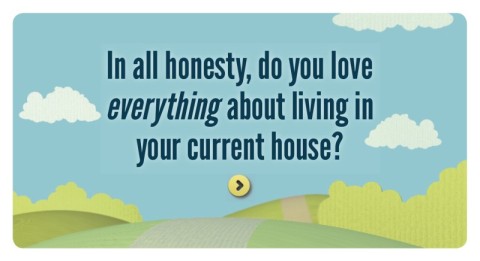 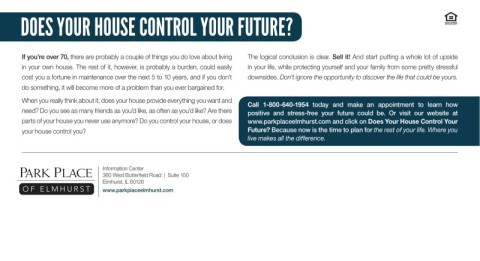 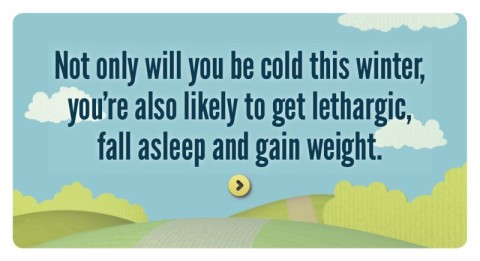 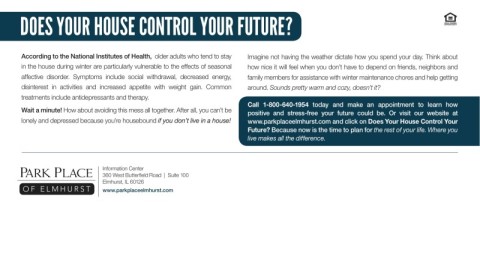 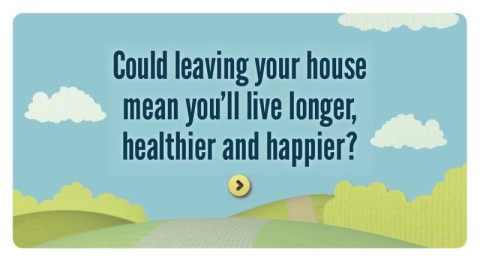 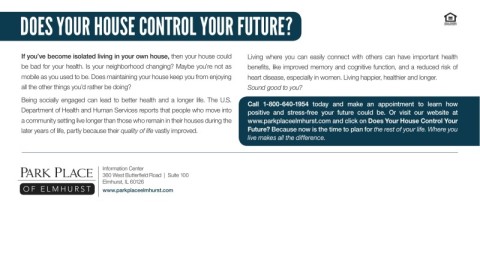